You are here: Home / Cookware / When To Open Instant Pot: The Safest Time To Do It?

When I bought my Instant Pot Electric Pressure Cooker, I was so excited to put it to use that I didn’t even care about going through the manual. Don’t be like me!

Go through the manual properly at least once. As new owners of the prestigious cooker, you might be confused about its opening mechanisms. You might even get intimidated by the noise and jet of steam you see when the pressure is released. Don’t worry, I got you!

You’ll be able to make scrumptious dishes once you learn the ways to easily open the instant pot. Let’s see what time is the safest to do so.

When the cooking time gets completed, the instant pot will beep and direct you to release the pressure inside. The two methods that can be used here are-

If you see drops of liquid or foam emerging from the valve, then switch the valve back to the sealed position and use the intermittent pressure release process to release the steam.

Keep your hands and face away from the steam when it gets released.

When to use Quick Pressure Release?

When you use this method, the pressure releases as soon as the cooking time stops. Hence, you must use this method when you want to avoid overcooking vegetables or rice.

Some of the recipes you can cook using the quick pressure release method are steamed dumplings, sausages, corn on the cob, potato salads etc.

Never use this method with ingredients that are fatty or thick or those which foam.

When the cook time ends, keep your Instant Pot in the sealed position. This releases the pressure naturally and you play no role here. This process is known as the natural pressure release process. When the pressure is fully released, the float value drops. Now you can safely unlock and open the lid of the cooker.

A natural pressure release won’t scare you with a jet of steam. You won’t even get to know when the process starts and the pressure gets released. There is no specific beep or signal, just a faint click when the float valve drops.

The time taken by the process depends on the ingredients out inside and the amount of liquid present in the pressure cooker. The Instant Pot electric pressure cooker may take from 5 minutes to half an hour accordingly.

Remember the food inside the cooking pot continues to cook as the pressure decreases.

When to use Natural Pressure Release?

A Natural Pressure Release allows the pressure to get released gradually, hence the cooking time is also increased. You won’t like to open the valve quickly to find out the ingredients foaming. It might not be quite safe.

Thus, you must use this method to make large pots of soups, pasts or steel cut oats. Large cuts of meat become more tender if you let it cook in the pressure cooker gradually. Other recipes that you can try using the natural pressure release process are turkey breasts, beef ribs, pork etc.

If you’re scared of the jet of steam released by the quick release process but your recipe requires using that method, I can find you a solution. Just reduce the cook time and use the natural pressure release method!

You must remember that the cooking continues as the pressure is decreasing in this process. Therefore, set your time accordingly. 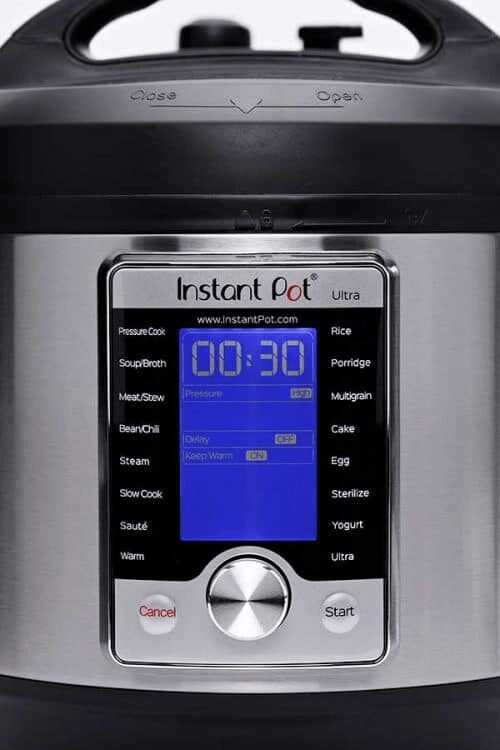 These two are the main methods that should be used to open the instant pot. Another method that can be used is the intermittent pressure release method.

Intermittent Pressure Release Method is a way to have the benefits of both the methods. For food such as soups, certain grains, pastas and noodles that are prone to foaming or spitting when you use a quick pressure release and tend to overcook using the natural pressure release method, you can use this amazing method.

Tips – You don’t need to turn off your Instant pot pressure cooker for a Quick or Natural pressure process release but I recommend not to do so. You can also set a timer for 10 minutes yourself to check on the natural process state.

Do not open the pressure cooker when there is still pressure inside. You might get seriously injured because of the steam or make a huge mess in your kitchen. Do not press the float valve yourself and try to open the lid of the cooker.

These are some safety measures you should keep in mind when using the Instant Pot electric pressure cooker. The best time to open the Instant pot is when the pressure gets fully released!