You are here: Home / Kitchen / What Happens if You Put Ice in a Deep Fryer ?

Feeling excited , are we ?

This is not an everyday thought that pops up in people’s mind but since you are here , why not help you with your question .

For starters you and I , should be very careful while we perform such an experiment , whose outcome is uncertain . If all goes well , everything’s fine , but if by chance it’s our unlucky day , we can end up having serious and severe burns all over our body . It also depends on which type of ice you are using .

Now , if I were you , I would avoid doing the experiment altogether if it wasn’t absolutely necessary , but if you did have to make a choice , I would suggest you to pick normal ice over dry ice .

This has it’s own advantages as well :

Let us have a visual analysis first , shall we ?

Given below are two sections with two different pictures which might give you an idea of what would generally happen as soon as you conduct the experiment .

Also , you would require the below mentioned things to carry out the experiment .

Also, please wear fire-resistant material on your hands to prevent burns and for your own safety . 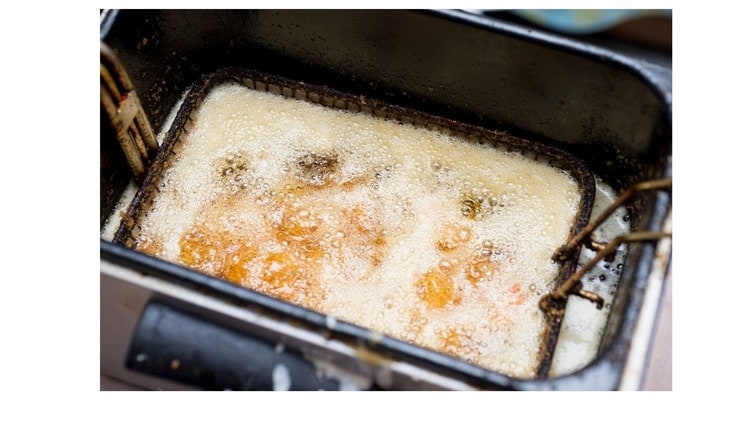 Ice inside a deep fryer

This is what happens as soon as you add normal ice as soon as it is left inside a deep fryer.

If you were to throw an ice cube in your fryer, stand back because chances are you’ll lose your face.

The reaction between the hot oil and cold ‘water’ will instantly send the oil into a mad frenzy.

It will bubble, spit, throw hot oil up and around. We do not have ice any longer.

This is because of the fact that the oil in the deep fryer is left to heat up before it is exposed to ice .

As soon as ice comes in contact with the surface of the oil , it starts melting and hence the term “cold water” is more adequate to use than ice after the process has begun .

Why does this happen ?

Well , with a limited knowledge of thermodynamics , we can find the answer to it .

The exceptionally high temperature can provide a significant amount of heat that will cause an instant change of state from ice to cold water to steam , creating instantly a considerable change in pressure, thus in volume, that is , an explosive behaviour for each drop of water .

So for each water molecule which undergoes state change , a large amount of heat is released along with change in pressure and volume .

Also , if there are two or three ice cubes added in a small deep fryer , the same process is repeated , but considering an exceptionally large area , with a humungous space , if thousands of ice cubes are added all at once , due to the property of heat transfer from a hot body to a cold body , not all ice would evaporate .

At a given instance , the temperature of the hot oil would lower .

Furthermore , if the fryer is not connected to an external source of current / heat , there would arrive a time when all the oil would have cooled down and we would be able to see two different layers of water and oil , as due to their varying density , these two fluids do not tend to mix at all .

A clear line of distinction would be visible , but this case is not ideal for an experiment conducted in your kitchen or your backyard . 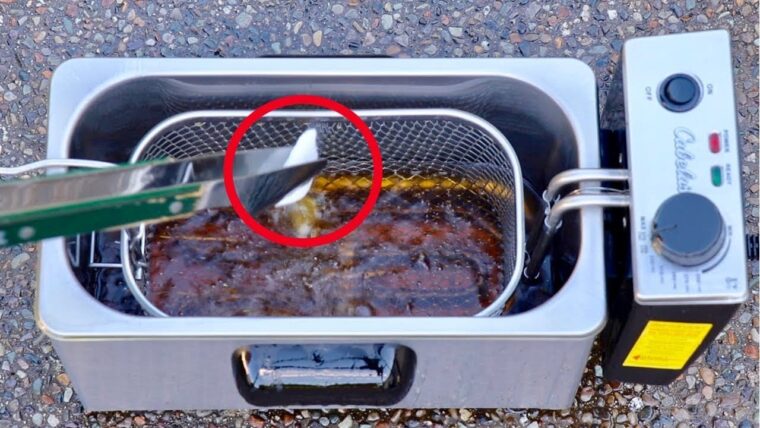 The story of dry ice is not completely different to that of normal ice .

There are a lot of similarities that can be seen in both the processes . While , both of the materials would lead to a spooky reaction from the hot oil , causing it to discharge a huge amount of heat along with erupting out of the fryer as small droplets .

But the fun part or the weird part , depending on how much of a geek you are in relation to physics and chemistry , is that , if midway during the process , you happen to take out one of the dry ice cubes , you will notice that a good part of it is melted along with a squeaky , irritating sound which was earlier not observed in the case of normal ice cubes .

So why does this happen ?

What is so different about carbon di oxide that even though it is used to extinguish fire and thereby remove heat , it’s solid state makes a squeaky sound as soon as it is pulled out of burning oil ?

This happens because as soon as the dry ice cube is pulled out of burning oil , it is still pretty hot .

Due to this temperature , solid carbon di oxide changes to gaseous carbon di oxide when it comes in contact with the atmosphere or precisely the molecules present in the air like oxygen ( O2 ) .

The details of the reaction are complicated as it involves a bunch of stuff like ionization energy , latent heat capacity and of course , exothermic reactions which mean reactions that give off heat ( in a definite amount ) as they are carried out .

You may also see a gas being left off by the piece of dry ice as soon as you take it out of the deep fryer , along with the noise .

This is nothing , but carbon di oxide gas which is released as a by product of the reaction .

To sum it all up , both normal ice and dry ice react with hot oil in a deep fryer which makes them expand and causes the oil to pop out of the fryer in small quantities .

However , even if the quantity is not much , these droplets are hot enough to burn your hand or face leaving serious bruise marks all over your body . Prevention is better than cure and I could not stress on this enough .

I myself have done this experiment and prepared this article and if not done carefully ,

I can guarantee that , without precautions , it’s not easy and will not be a piece of cake .