You are here: Home / Cookware / Why do Slow Cookers Crack?

In the modern contemporary times, technology has become so innate a part of the lives of people that it could be witnessed in every household at a huge scale.

In our busy lifestyles, it has come as a savior for many as it has made many tasks of our daily life much easier.

And the kitchen is definitely not an exception.

Today, we will be talking about one such electrical equipment to be used in the kitchen to make our cooking much easier.

And the name of the kitchen equipment/appliance under consideration is Slow Cookers. 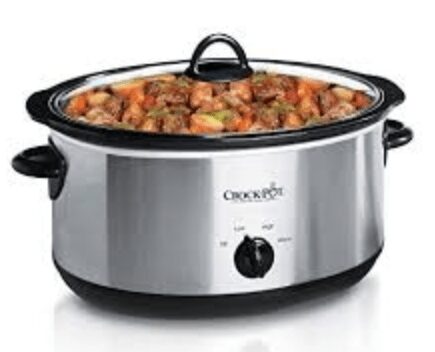 I personally have used slow cookers many times and had sometimes left them on overnight or while I was at work and it has never been a problem.

But lately I’ve heard many concerns regarding the cracking of the slow cookers and this is what made me research more about this issue.

This research made me realise that it is because of the three possible reasons that a slow cooker might crack.

So, now let me explain you in detail the reasons because of which the Slow Cookers might crack by addressing the question that ‘Why Do Slow Cookers Crack?’ in this article.

What are the top causes of slow cookers crackers?

This is where we start delving into more details to discover the reasons behind the cracking of cookers.

Cracking is most likely to occur when you place a hot slow cooker into cold water.

To give an example, once we have taken the food out of the Crock-pot, we are very likely to immediately fill it with water so that the nothing sticks on the inside of the cooker.

Doing this while the ceramic insert is still hot could much possibly lead to the cracking of the slow cooker if the water was cold enough.

Another reason for cracking could be setting the ceramic insert down on a hard surface with too much force. These cracks might not be clearly visible when occured but they can surely break apart the next time when the slow cooker will be used.

Also, Crock-Pot themselves recommends to always fill your slow cooker at least ⅓ of the way full.

Also, it is always suggested to have some liquid in the slow cooker to avoid the risk of burning your food. It would also prevent drying out, thus, it should be added unless the food has high moisture and/or fat content already.

But if left on for too long, there’s also a slight possibility of cracking.

Lastly, if you use the slow cookers to reheat the food which is just drawn out of the refrigerator and is still very cold, it is likely to cause the problem of cracking up of the slow cookers.

Thus, it is always suggested to let the food be exposed to the room temperature until it is not cold anymore before reheating it.

Can you fix a cracked Crock-pot or slow cooker?

My strict recommendation to this would be NO.

This is because glueing the crack is likely to put the food security at stake.

Also, the fix might not be able to hold up to the heat for a longer period of time.

So, considering the inexpensive Crock-Pots available in the market, i would suggest not to attempt fixing the slow cooker and using it.

Let’s answer some more common queries regarding the use of slow cookers.

Is it safe to leave the slow cooker ‘On’ overnight?

Many have the slow cookers at their homes but they aren’t really sure about how to use it.

The most common query is that can these cookers be left ‘on’ for a longer period of time.

You can surely do that as an answer to this question is Yes.

These cookers are specially designed in a way to be left ‘on’ for a longer period of time.

However, it doesn’t mean that carelessness like adding a wrong combination of ingredients won’t make the food scorch at the bottom or that adding too much liquid would not make it splatter on the counter. But generally, it’s completely safe to leave the slow cooker ‘on’ at night.

Just that, make sure you take precautions like keeping it 6″ away from the walls and the cord is not near the sink or any liquids.

Is it Safe to leave a slow cooker on while at work? 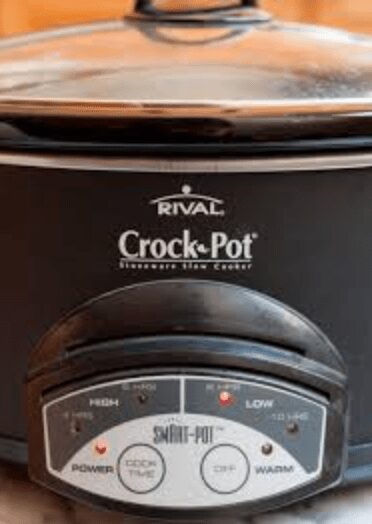 Also, make sure your Crock-Pot is on a heat-proof surface like granite countertops and that the surface is flat so as to avoid any falling and spilling of the food.

Can I leave a slow cooker on warm all day?

The warm setting on most Crock-Pots and other brands of slow cookers is designed to hold your temperature.

Thus, you must know that these cookers are not meant to heat up food.

So, you need to make sure that your food is thoroughly cooked and then you can leave it on warm all day.

To take an instance, if you have cooked a brisket all night and want to have it for dinner, you can set it to warm before you leave for work.

Just make sure to add plenty of sauce to it and then it should hold temperature just fine all day.

Can you put a Pyrex dish in a slow cooker?

Surprisingly, the answer which I found out is Yes. 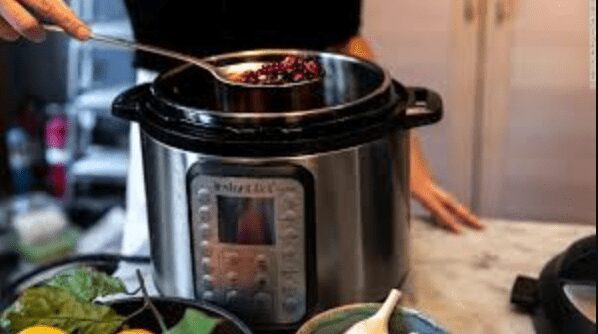 Simply put your ingredients into a small oven-safe glass baking or Pyrex-style container and set that inside the slow cooker.

Now, Oven is yet another appliance much commonly used in the kitchens. Let’s address some questions related to that with regards to the Slow Cookers.

Can you put a slow cooker dish in the oven?

The answer to this question is Yes.

Mostly all the brands of the slow cookers are microwave, oven and dishwasher safe.

However, it is strictly suggested to not use them over a stovetop or over an open flame of any kind because heating a slow cooker on a stovetop could definitely be another reason why slow cookers crack.

However, it would always be better to confirm it from your manufacturer before purchasing a certain slow cooker.

This concern about the slow cookers came into picture from a 2004 investigation by Bill Gebhardt of Salt Lake City’s KUTV.

He was investigating the possible lead exposure to the food because of its leaching once the pot gets hot. He found that about 20% of the slow cookers were leaching small amounts of lead into the food cooked in them.

In general, when ceramic containers are heated upto 80°, they release 10 times the amount of lead than they do unheated.

Since slow cookers heat at the temperature of above 250°, he felt it was worth investigating.

However now, over 15 years later, virtually all brands of slow cookers state that their products do not contain any sort of leaded glaze.

They also state that their slow cooker is in accordance with the FDA Compliance Policy which states that leach levels of 1 mcg/ml are acceptable.

The good news is that the FDA maintains a list of products that have tested positive for lead and there are NO slow cookers on that list.

Now let’s address the last query regarding the slow cookers before concluding the article.

The answer to this is no.

At least not when your slow cooker is in good working condition.

Everything which is an electronic item has the chances to catch fire in extraordinary cases. It could be either because of the plug being faulty, wire being faulty or because of some fault in an appliance.

However, that being said, if your slow cooker is in perfect working order with no broken switches or frayed cords, it’s very unlikely to catch fire and would just be fine.

Now let’s take a look at what all points we have covered in this article before concluding this article.

In this article, we took into consideration the concerns that a lot of Crock-Pot lovers have over safety and looked at the detail related to each of those concerns.

We examined the hazy facts about slow cookers catching fire and clarified it. Also, the rumours related to toxicity of the Crock-Pots were dealt with. Apart from this, we looked at some of the basic safety questions like whether you can leave your slow cooker ‘on’ while you are at work or at night.

And we definitely answered the question with which we started the article i.e.

Why do Slow Cookers Crack?

So, now we are all set to conclude this article!

We can conclude this article by saying that yes, the slow cookers can crack because of some of the reasons like that of putting the hot slow cooker in cold water, banging it hard by mistake on a hard surface or using it for reheating the food which is cold and not of the room temperature.