You are here: Home / Food-drink / How Is Vietnamese Food Different Than Chinese?

Food has always been the most crucial part of our lives.

Indulging in healthy eating habits is crucial. Whether it’s Indian, Mexican, Greek, Vietnamese, or Chinese cuisine, each is characterized by special flavors which makes them unique from one another. Their exquisite and numerous dishes, the color, aroma, taste, and appearance makes them different and special. Tempting food has always been the most important component for healthy eating habits. Let’s dig in! 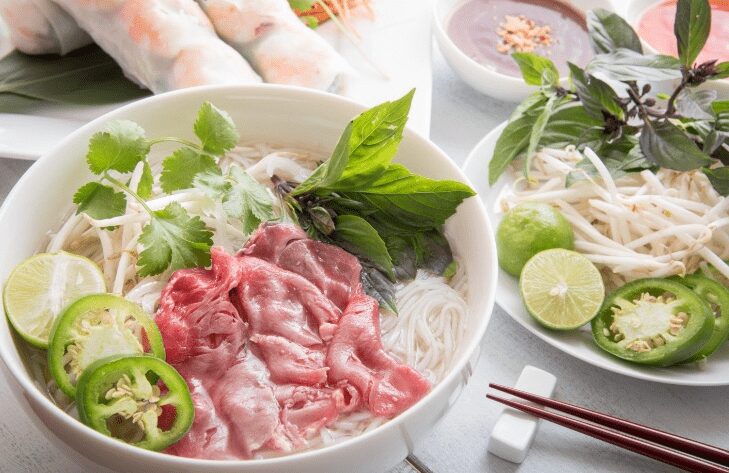 From being considered as one of the healthiest cuisines worldwide Vietnamese food is famous for its selective use of spices and a perfect balance between the fresh herbs and meat used in the dishes with fine taste.

The cuisine reflects a combination of five fundamental tastes in their meals.

And each of these dishes has a unique taste and flavor which presents one or more of these elements. The most common ingredients used in their dishes are- bean and fish sauce, shrimp paste, rice, fruits, vegetables, and fresh herbs.

French Cuisine does play a very crucial role in Vietnamese cuisine due to the French colonization in Vietnam.

And due to its negligible use of oil and dairy, dynamic contrasting textures and abundance of fresh herbs and vegetables in their dishes, make the traditional Vietnamese cooking more admirable.

And the food usually contains low sugar and is gluten-free, as most of the dishes are made from rice like rice noodles, rice papers, rice flour.

Chinese cuisine and culture go hand in hand. Because of its rich history and exquisite taste, Chinese food has influenced many other parts of Asia, allowing little modifications to local plates. When it comes to the staple foods of China, the focus is on noodles, rice, soy sauce, tofu, and tea. These foods are widely consumed in everyday meals. Lo mein and chow mein noodles are among the most popular Chinese dishes. SideChef explains that chow mein noodles are soaked or par-boiled to make them softer before stir-frying, and they finish cooking after they are stir-fried with all other ingredients. Lo mein noodles are fully cooked and then mixed with stir-fried vegetables, meat, and sauce. Both are wonderful options if you’re looking to make a quick and delicious meal. 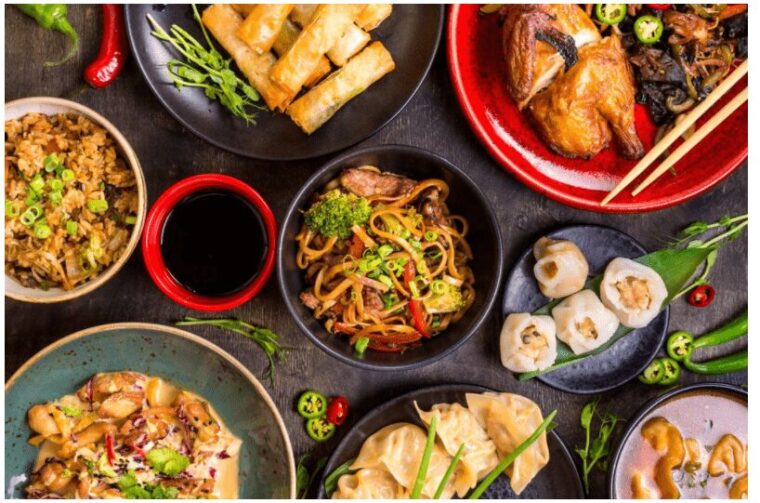 As every cuisine has its own specialty, Chinese food is liked by people all around the world. And its cooking techniques for different dishes depend upon their historical background and prominent ethnic groups.

Though the climate of china has a variation from tropical in the south to subarctic in the northwest.

And when we talk about Chinese food, apart from the aroma, color, and taste, parameters like the appearance and nutrition of the food, best describe the authenticity of them.

All kind of Asian foods whether it be Thai, Chinese, Japanese or Vietnamese, share some similarities among them in flavours and base ingredients.

Yet there is a difference in these cuisines based on their cultures, geographical conditions and nutritional requirements of people.

And by the end of this article you will get to know the dissimilarities between the Vietnamese food and Chinese food.

There are a fair share of commonalities between the Vietnamese and Chinese food in terms of the base constituents such as ingredients, flavours and sauces etc.

Rice and noodles are used as base, soy sauce is used for flavouring and pork and beef are used in both cuisines.

But in the following sections of this article we will discover the differences between Vietnamese and Chinese food.

Comparing the use of herbs and oils between Vietnamese and Chinese food:

In Vietnamese food, fresh herbs and green vegetables are used in abundance.

They are served as side dishes and often eaten raw with some light sauce.

They use very less amount of cooking oils and hardly fry their herbs to provide a delicate and light flavouring to the food.

Vietnam is a tropical country that means fresh vegetables are easily available and so they are part of most of the dishes. Mint leaves and basil leaves are used for their refreshing qualities.

On the other hand, Chinese cook there herbs and vegetables in flavour rich cooking oils and use soy sauce to bring out heavy flavours in their food.

The vegetables are not just the part of side dishes instead they are cooked together with other components such as meat rice or noodles etc.

Chinese food has higher calorie content due to the heavy use of oil and sauce; also they have very strong flavours.

Comparing the flavours between Vietnamese and Chinese food:

The chicken, pork or beef are served in thin slices to provide right amount of flavour to the food without overpowering the mild flavours of side dishes and soups. All these light ingredients and mild flavours complement each other a lot and gives a delightful experience to anyone.

The Chinese food has very strong flavours due to the excessive use of flavoured cooking oils, soy sauce and chilli sauce.

The herbs and vegetables are fried with the base components of food and various salt and sugar mix sauces are used.

The protein part of the food i.e., chicken, pork or beef are served in large portions cooked in spices and sauce (particularly in Szechwan region).

Comparing the nutritional values of Vietnamese and Chinese food:

Vietnamese food is considered healthier than Chinese food mostly because it has fresh ingredients and the less use of oil.

As Vietnam is a tropical country fresh herbs and vegetables are easily available and often as accompaniments to their main dishes they are eaten raw.

Vietnamese food tends to have right amount of carbohydrates, vitamins and proteins due to the use of rice, raw vegetables, and soup and fish sauce.

China is a mountainous country and therefore Chinese people need a lot of calories. Hence the Chinese food has higher calorie content with use of cooking oils in frying of vegetables, meat and base ingredients, heavy use of sauce and using larger portions of meat.

Most of these changes among Chinese and Vietnamese food are due to the French colonisation of Vietnam.

Difference in cultural influence on Chinese and Vietnamese food:

The French invasion of Vietnam has been huge reason for the difference in Vietnamese and Chinese food. The French introduced the Vietnamese with mild flavours and use of fresh herbs.

Coffee, potatoes and baguettes were included in most of the Vietnamese cuisines after the French colonisation.

Because of the fact that Vietnam is a tropical country climate there is warmer and humid. Hence vegetables are used a lot in their food.

They can be served raw with some fish sauce or they can be mixed in soup. In the northern Vietnam, due to some Chinese influence on food saltier sauce are used in food.

China is a cold and mountainous country and to keep their bodies warm Chinese people need a lot of calories. Hence Chinese food is a calorie rich diet.

The ingredients of Chinese food are served in large portions. Vegetables, noodles and meat are fried in oil and served with thick covering of sauce. Both the Chinese food and Vietnamese food aren’t very spicy. Due to strong flavours and aroma Chinese food is very famous in western countries.

In Vietnamese food, popular cuisines are Vietnamese pho (chicken or beef broth with noodles), Banh mi (a sandwich with carrots and pork) and Bun Bo hue (another broth noodles made with vermicelli noodles). Vietnamese food is very healthy with mild flavours and fresh herbs.

So yes, Chinese food and Vietnamese food share their similarities among themselves and with other Asian foods in terms of their base ingredients, sauce and flavours.

But they have their individuality in how they put together these ingredients to complement each other and bring out that delightful taste that you are going to enjoy again and again.

So next time when you plan on eating out, do try Chinese or Vietnamese food.